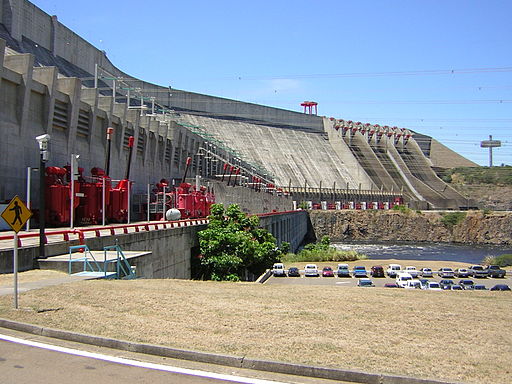 The Simón Bolívar Hydroelectric Plant, or Guri Dam for short, to a hydroelectric power plant in Venezuela on the Caroní River. At the time of its commissioning, it was the most powerful power plant in the world. Although today it is surpassed in terms of performance by the Three Gorges in China and Itaipu in Brazil / Paraguay.

The beginning of construction work dates back to 1963, when about 100 kilometers from the mouth of the Caroni River to Orinoco. First, a dam was built, which had a length of 690 meters and a height of 106 meters. In this period, a capacity of 1750 MW was first installed, which was later increased to 2065 MW. He was in charge of a total of ten turbines.

However, it soon became clear that the demand for energy was still higher, and so in 1976 it began to be fully built again. Thus, the gravity dam was extended to 7426 meters and the height reached 162 meters. Thanks to this, one of the largest lakes in the world was formed. Other turbines were connected and in total this waterworks will supply up to 12.9 TWh of electricity to the grid annually.