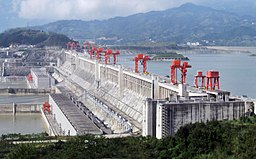 The Three Gorges is not only a dam, but also the power plant with the highest output in the whole world. The hydroelectric power plant consists of a total of 32 turbines with an output of 700 MW, so the total output is 22400 MW.

The long-planned dam, which was postponed for a long time due to high financial costs, was completed in 2006. The first generators started supplying electricity to the grid in 2008, and others were added in 2011. This year, the power plant reached its planned output.